Lurainya Koerber is a professional performer, instructor and choreographer of American Bellydance and her own Ethnic fusion. She is dedicated to respectfully and responsibly heightening the awareness and prestige of this dance as an ancient art, innovative form of exercise and a source of healing. Her efforts are constantly focused on bringing this dance into the main stream as not only a form of respectful entertainment, but as a healthful dance for women searching out their entirety.

She is also the Founder/Director of a newly formed 501(c)(3) charitable organization called WomenMove, Inc. This non-profit will focus on healing and empowering women & girls around the world through the arts and inspiring them to become change-makers.

Lurainya is also an artist and writer. To learn more about her other projects, please visit Lurainya.com.

With hopes of reaching as broad a public as possible with her art, Lurainya consistently strives for new means of communication. Her four television appearances include CN8 “Your Morning” and Fox29 “Good Day with Kerri Lee”. She has been featured in Kimberly Garrison’s Health and Wellness PodCast as well as several newspaper articles including The Intelligencer, The Bucks County Herald, Out and About, PhillyFit and more.

Lurainya produces, directs and choreographs annual dance productions called WDX™ (World Dance Extravaganza), as well as annual student recitals for those of her students wishing to perform. She has also been working toward large scale dance-theater productions entitled REALM™ and NECTAR OF THE MOON™. Additionally, Lurainya is working on a benefit project called ‘World Dance for World Peace™’. These shows, in conjunction with teaching, will further Lurainya’s goal of healing and empowering women through dance. 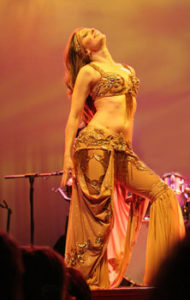 Lurainya has performed at World Café Live in Philadelphia, Sellersville Theater, Puck in Doylestown, the PA Renaissance Faire, numerous shows and haflas in the tri-state area, and several Arts and Ethnic Festivals.

Additionally, she has been a featured performer at the Casablanca restaurant in Warrington since the year 2000.

Additionally, she has taught and lectured on the History and Benefits of Bellydance, as well as Female Empowerment through Dance, at The University of Pennsylvania’s Women’s Health Convention, the American Holistic Nursing Association, the Women’s Business Forum, the Philadelphia Women’s Health and Wellness Expo, Bucks County Community College’s Day for All Women, the Hatboro-Horsham High School Health Faire, and more. 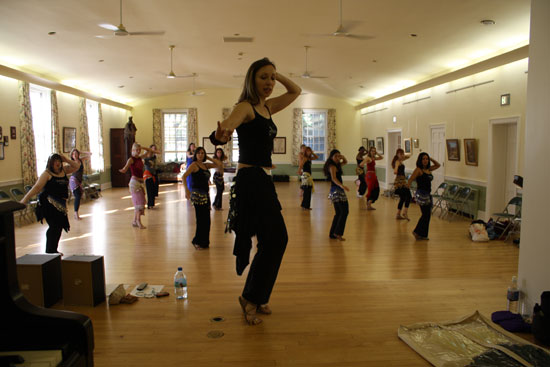 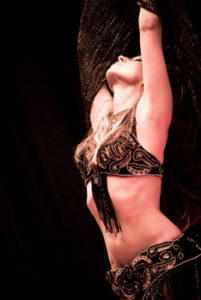 Lurainya feels that being a woman means being a combination of strength and sensuality, and it’s that combination that she exudes when performing. Though she appreciates and respects the traditional styles of “Raqs Sharqi” (an authentic term for Bellydance meaning “Dance of the East” in Arabic), she prefers to perform in her own modern fusion, which she calls “American Bellydance.” In love with both the glitz and glamour of “Cabaret” and the earthy, raw femininity of “Tribal,” Lurainya performs both, switching easily between the two – yet always making sure to add her own style.

As an artist her entire life, Lurainya has always expressed herself through a multitude of mediums, but it wasn’t until her mid twenties that dance become one of them. Not letting her shyness get the best of her, she took her first steps in this world of dance in 1997, and knew immediately that it would forever be a part of her life. Like most women, she had to overcome her insecurities, but with desire and determination, she found the courage to do so.

Lurainya teaches not only the beauty of this dance, but the many benefits to the mind, body and spirit as well. She has worked with occupational and physical therapists who concur that the intense muscle control and isolations necessary for this dance are ideal forms of rehabilitation for many patients. Her efforts are constantly focused on bringing this dance into the main stream as not only a form of respectful entertainment, but as a healthful dance for women searching our their entirety. 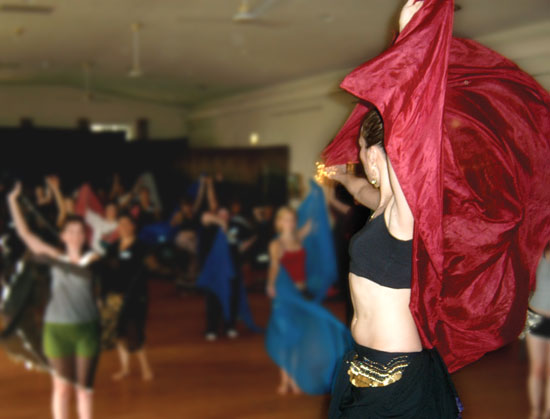 Lurainya knows the power that Bellydance has to change lives, and for that reason, she loves teaching. With patience and sensitivity, she is able to reach students who wouldn’t normally venture into such an experience. Many women who inquire about classes are sometimes shy and unsure, but years later, the same women are still in her classes as devout students with more confidence and higher self-esteem! To read student testimonials, click here.

Lurainya attributes much of her teaching skill to her life experiences. Her sister was born totally blind, so Lurainya grew up teaching someone who never had sight how to see through other senses. Describing a color to someone who’s never known any takes an unusual creativity. Along with her blindness, there are other severe disabilities that make her sister’s every day a struggle. Lurainya grew up right next to her, seeing the best and worst of people at a very early age. She’s thankful for the challenges she and her family have endured, as they’ve given her an endless supply of strength and compassion. Lurainya is proud to have such an amazing person for her sister, and learned from the beginning never to take for granted even the “simplest” of tasks. It’s this compassion she brings to her students that puts at ease even the most shy of personalities.

She has taught numerous workshops, the titles of which have included: Drum Solo, Veil, and Modern Bellydance Fusion Choreography; Costuming & Stage Makeup; The Basics of Bellydance; Tools & Techniques for Proper Isolations in Your Dance; Creativity in Your Dance; Why Every Woman Should Learn to Bellydance (students leave with improved posture, higher confidence, and better self-esteem).

To view any of the images in the gallery below, simply click on the photo you would like to enlarge.
Click anywhere in the blue background that appears to return to the other images.